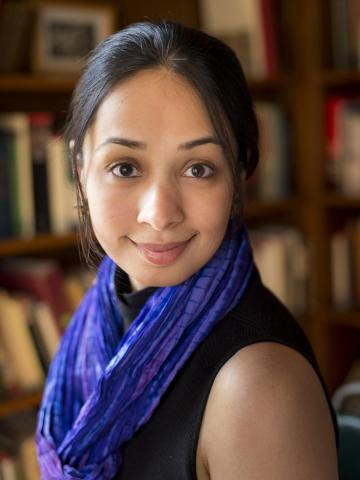 I am a literary critic and cultural historian of early modern Europe. My recent work focuses on Europe’s relations with an expanding world—my first book, The Worldmakers (University of Chicago Press, 2015) charts transnational encounters and the early mechanisms of globalization from the late fifteenth to the early eighteenth centuries. It was awarded the MLA’s Scaglione prize in Comparative Literary Studies (2017), the Milton Society of America’s Shawcross Prize for the best book chapter on Milton (2016), and the Sixteenth Century Studies Association’s Founder’s Prize for the best first book manuscript (2015). Though I work primarily with the English, French, and Italian literary traditions, my interests extend to Portuguese, Spanish and Neo-Latin materials; with the support of a Mellon New Directions Fellowship (2016), I hope to expand my work into Persian and early modern South Asia. In addition to literary and intellectual historical questions, I am interested in early modern maps (particularly world mapping), the history of science and technology, early modern empires, and the rich visual archive of illustrated books in the period). My current book project, Lyric Thinking: Humanism, Selfhood, Modernity, argues for the central importance of lyric form and language in shaping new intellectual possibilities for the self in the early modern period and beyond. Moving from Petrarch to Descartes, while also considering their afterlives in modernist writing, it draws together scholarship on theories of mind, cognition and meditation with a complex literary history of lyric’s foundational encounters with other genres, particularly the epic.

My teaching ranges across the comparative literature curriculum: I have team taught in one of the department’s signature courses, LITR 120: Introduction to Narrative, where I lecture on Rushdie’s Satanic Verses; and regularly offer an interdisciplinary course on Maps and the Western Literary Imagination, taught at the Beinecke Library; courses on early modern skepticism, worldmaking and love lyric poetry; and most recently, a co-taught course with Marta Figlerowicz on Modernities: Selfhood, Race, Class and Gender. In Fall 2017, we will also co-teach a graduate seminar on recent theoretical shifts in the discipline entitled “What Happened to Race, Class, and Gender? Keywords of Recent Critical Theory.” In 2016, I was awarded a Poorvu Family Award for Interdisciplinary Teaching.

For a full list of publications and full texts, please see my self-archived articles here.

“What Can We Learn from Renaissance Literary Critics?” (in conjunction with a Newberry Library Symposium on “Contexts of Early Modern Literary Criticism in Italy and Beyond”)

“Between Thought and Feeling: The Uses of Lyric in the Orlando Furioso,” MLN Special Issue for Ariosto 500