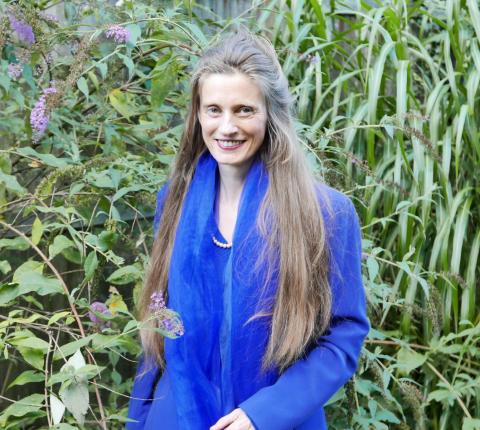 Moira Fradinger is Associate Professor in the department of Comparative Literature. She grew up in four South American countries: Argentina, Uruguay, Peru and Venezuela. A native speaker of Spanish, she is also proficient in French, Italian and Portuguese. Before her academic life in the USA, she had started her career as a psychologist in Argentina, working in clinical practice with patients living with psychosis in public hospitals. She participated in the anti-asylum movement and she was also a professional staff member in the National Ministry of Health and Social Action at the Under-Secretary for Women’s Affairs and taught at the University of Buenos Aires. She joined Yale first as a graduate student, and then as an Assistant Professor in 2005 in Comparative Literature.

She is the author of Binding Violence: Literary Visions of Political Origins (Stanford UP, 2010) and of Antígonas: Writing From Latin America (forthcoming at Oxford University Press). She has written articles on Latin American film and literature, and on the reception of classical tragedy in Latin America. She has completed the translation project Antígonas Anthology, consisting of six 20th century Latin American vernacular Antígona plays translated into English, from Haiti, Argentina, Colombia, Peru, Mexico and Brazil. She has also translated poems and short stories from Spanish into English.

Her current book projects are on contemporary Argentine gender debates, on Latin American Third Cinema and on Insomnia.

She has been awarded the Dahlem International Network Professorship for Gender Studies, Freie Universität Berlin, where she taught Gender Theory, and has received a Berlin Prize, spending a semester as a fellow at the American Academy in Berlin, Germany.

She has won several teaching awards; the latest one was the Sarai Ribicoff Award for the Encouragement of Teaching at the Yale College (2012). She has taught courses on topics such as Latin American Third Cinema and Contemporary Film; Latin American and Caribbean Anti-Colonial Thought (19th and 20th centuries); Marxist Cultural Theory; European and Latin American literature; Psychoanalytic theories of the subject; Jacques Lacan and the Post-Freudians; Gender theories and their politics; Introduction to Narrative; Feminist Film makers; and cross-divisional courses such as Freud and Science and Blood: Culture and Science.

She is affiliated with the Multidisciplinary Academic Program in Human Rights, the MacMillan Center for International and Area Studies, and the Women’s, Gender and Sexuality Studies Council. She is a member of the Executive Committee of the Council of Latin American Studies (CLAIS) and of the Executive Committee of the Latin American Interdisciplinary Gender Studies Network LAIGN (Yale-Unam, Mexico). She is currently curating the monthly webinar series on Gender: “Conversatorios de los viernes” (CLAIS).