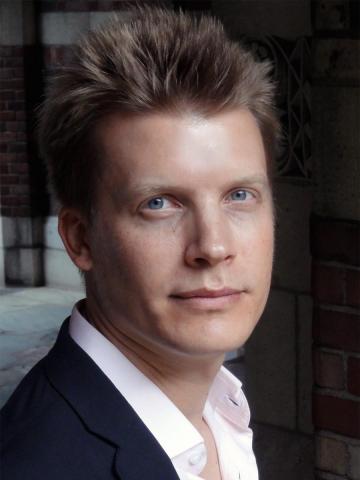 Born and raised in Sweden, Martin Hägglund specializes in post-Kantian philosophy, critical theory, and modernist literature—ranging across French, German, English, and Scandinavian languages. At Yale he has recently taught courses on Heidegger’s Being and Time, the temporality of narrative from Conrad to Beckett, and the mortality of the soul from Aristotle to John McDowell. Professor Hägglund is the author of four highly acclaimed books, which engage with philosophers of time (from Kant to Husserl and Derrida), theorists of desire (from Augustine to Freud and Lacan), modern writers (Proust, Woolf, Nabokov), and the legacy of German idealism (from Hegel to Marx and beyond).

His work is the subject of a special issue of CR: The New Centennial Review, Living On: Of Martin Hägglund, a symposium in Los Angeles Review of Books, and a special issue of The Philosopher, the longest-running public philosophy journal in the UK. His books have also been the subject of conferences and colloquia at Harvard, Yale, NYU, Cornell, and Oxford. He has received fellowships from the Woodrow Wilson Foundation, the Fulbright Commission, and the Bogliasco Foundation. He was elected to the Harvard Society of Fellows in 2009, awarded The Schück Prize by the Swedish Academy in 2014, and received a Guggenheim Fellowship in 2018.

Hägglund’s work has been translated into a dozen languages and he has lectured at venues around the world. His most recent book, This Life: Secular Faith and Spiritual Freedom (2019) was named a Best Book of the Year by The Guardian, The Millions, NRC, and The Sydney Morning Herald. New York Magazine selected it as one of the essential books to read during the pandemic, and Prospect Magazine named Hägglund one of the world’s top 50 thinkers. This Life was awarded the René Wellek Prize, the most prestigious honor bestowed by the American Comparative Literature Association.

“Marx, Hegel, and the Critique of Religion: A Response”, Los Angeles Review of Books, 2021