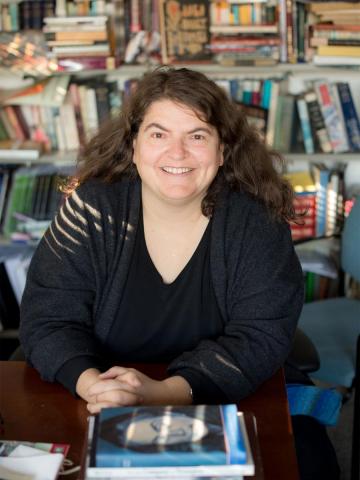 Her first book, Bardic Nationalism: The Romantic Novel and the British Empire (Princeton University Press, 1997) used a comparative approach to “English” literature, tracing how literary forms developed in Ireland and Scotland shaped the early literary life of Canada and other British settler colonies. It was awarded the Modern Language Association Prize for a First Book and the British Academy’s Rose Mary Crawshay Prize.
The Viewing Platform: New Perspectives on the Panorama (co-edited with Timothy Barringer, to be published by Yale University Press) explores nineteenth-century panorama paintings and their influence on twentieth-century film, installation art and museology.

The Divided Screen: The Cinemas of Postwar Germany (to be published by Princeton University Press), the first full-length comparison of the East and West German cinemas, focuses on genres and counter-genres, audience and spectatorship, Cold War sectarianism and cosmopolitanism.
She is working on a new comparative project on European modernists and their representations of childhood in literature, painting, film and music, as on a book of essays about Romantic and modernist children’s literature.

She co-edited Modern Philology 1995-2003, served on the Editorial Collective of Public Culture 1995-2010, and currently serves on the editorial boards of Public Culture, New German Critique, German Quarterly, and English Studies in Canada.

She was educated in Canada, the United States, and West Germany. From 1990-2002, she taught at the University of Chicago. She received Yale’s Graduate Mentoring Award, and has held Humboldt, Mellon, ACLS, American Academy in Berlin, Center for Advanced Study in the Behavioral Sciences, and Stanford Humanities Center fellowships.

“The Divided Screen: The Cinemas of Postwar Germany” (under contract, Princeton University Press)

“Nurse’s Song: Modernism in the Nursery”