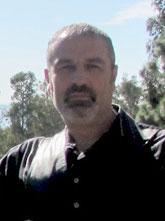 George Syrimis grew up on the island of Cyprus. After completing his military service, he received a Fulbright Scholarship to study at Cornell University where he completed his B.Sc. in Education in 1990. He subsequently pursued graduate work at Harvard University where he studied Modern Greek, Classical Greek and Modern Spanish literature. In 2001, he joined the newly established Program in Hellenic Studies at Yale University as the language lector and in 2004 was promoted to associate Program Chair of the same program. He has published articles on the oral tradition, Georgios Vizyenos, Cavafy, Mikis Theodorakis, and Nikos Kazantzakis. In addition to his academic work, he has also developed three electronic projects (Lexis and Ikones) for the instructions of Modern Greek language and literature. He is currently finishing a book on the poetics of C.P. Cavafy’s love poems entitled “”Try to Guard Them, Poet”: Homoeroticism and the Poetics of Opacity in C. P. Cavafy.” His research interests include music and national identity, religion and literature, cultural studies, reception studies, and gender and sexuality. His current research focuses on the literature on Julian the Apostate from the Enlightenment to the present in the works of Ibsen, Cavafy, Merezhkovsky, Kazantzakis, Michel Butor, Gore Vidal and popular literature.

“Homer in Greece: The Inevitable and Impossible Nostos” (Forthcoming in The Cambridge Encyclopedia of Homer, eds Thomas Jenkins and Corinne Pache)